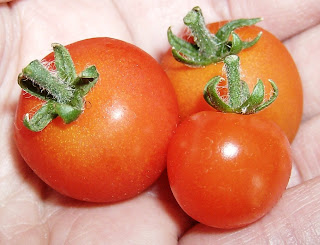 I couldn’t stand it any longer! I harvested a couple of stems of Swiss chard and 3 cherry tomatoes (2 were ready, 1 was close). We also ate several varieties of lettuces, spinach, onions, cilantro, parsley, radishes, and strawberries from the garden.

I thought I would show the process that has enabled me to harvest cherry tomatoes already. Stick with me and I promise not to whine too much about my short growing season. : ) I started seeds inside the last week of March. I used an indoor starter kit that included sod pellets and a clear lid. I wasn’t terribly happy with this set up. I felt that the roots were too shallow and the stems were too long and weak.

So I transferred the plants to my old standby: yogurt cups. I put a couple of holes in the bottom for drainage and used printer labels to identify the plants because chard and peppers look remarkably similar when seedlings. Since I felt the roots were not very well developed I planted them deep in the cups. I kept the plants in my kitchen window sill until it warmed up enough to put them outside in the portable greenhouse. On the evenings when it went below freezing I wheeled the portable greenhouse into the garage.

When the plants started to outgrow the yogurt cups I transferred them to larger containers. Some of my friends are afraid to transfer tomatoes, but I find that as long as you do not damage the root ball they will adjust to their new location well.
If you look closely you will see the baby tomatoes forming while still inside the portable greenhouse.
One day I pulled the greenhouse away from my house, so the plants could become accustomed to more direct sunlight. A sudden gust of wind came and toppled the greenhouse. I spent an hour trying to match seedlings with their yogurt cup. Remarkably they all survived, although I later discovered cilantro growing in parsley cups and peppers in Swiss chard cups!

I transferred several of the plants to the raised garden beds in mid May and harvested my first tomatoes 2 months after starting the seeds.
All of this just to eat 3 measly cherry tomatoes!
I still have 7 cherry tomato plants in my portable green house just in case we have another snowstorm.
4 shares 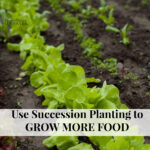 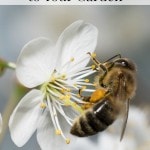 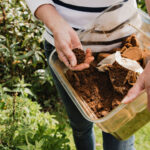 5 Ways to Use Coffee Grounds in the Garden

While volunteering as a budget counselor, I realized that food is the element of most people’s budgets where they have the greatest control. I set out to develop low-cost recipes from scratch to prove it’s possible to create delicious meals on a limited budget. Eating well while spending less is about more than just creating recipes using inexpensive ingredients; it’s about creatively combining ingredients so you don’t feel deprived and are inspired to stick to your budget.
4 shares