I almost didn’t share this recipe with you. I tasted it about 15 minutes after it came out of the oven and I wasn’t crazy about it or its appearance. My kids liked it; my daughter even went so far as to say she preferred it to regular oatmeal scotchies, but she prefers “wholesome snacks”, so I don’t always trust her opinion on desserts. However, I tried it after it had completely cooled and decided it was quite tasty, even though I still think it is fairly unattractive for a bar cookie: 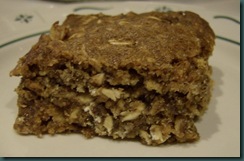 Regular oatmeal scotchies call for 1 cup of butter. Now I like butter as much as the next person, perhaps more, but I have a lactose intolerant child and I live at altitude. My son is alright with small amounts of dairy, but I try to avoid it if I can. And if you have tried baking at altitude you know how items with butter, especially cookies often fall during baking. I often replace butter with applesauce, but a whole cup of applesauce would greatly alter the taste, so I used a combination of flax seed meal, applesauce, and shortening (I like Spectrum Organic Shortening. It is non-hydrogenated, pressed palm oil). I also replaced half of the sugar with brown rice syrup and increased the cinnamon to provide a cover for the weird ingredients. 🙂 So I removed the gluten, butter, and some of the refined sugar.

You can also use 1 Tablespoon of flaxseed meal plus 3 Tablespoons of water to replace an egg in a recipe.

Spread dough in a 13 x 9 greased pan. Bake for 20 – 25 minutes at 375 degrees or until an inserted toothpick comes out clean. Cool completely in pan on a wire rack. When cool, cut into bars.