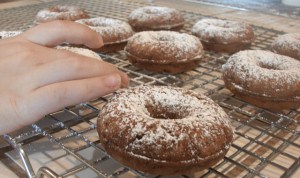 This afternoon I had the idea to combine pears and toffee pieces in a recipe. My family expressed doubt not only about the combination of flavors, but also my sanity. I don’t really object to them questioning my sanity, but I do think that by now they would have learned to trust me when I am baking sweets! Everyone enjoyed the doughnuts and they were declared “surprisingly delicious”.

I used homemade pear sauce in this recipe, but it could be replaced with applesauce. My pear sauce includes spices. If you use a plain pear or apple sauce, double the spices in the recipe.

You can make your own toffee bits. I used my traditional toffee recipe, leaving out the chocolate and nuts. Once the toffee has cooled, place it in a plastic bag and pound it until the toffee has broken into tiny bits.

Directions (for both Donut Pans and Donut Maker):

If using the oven preheat oven to 350 degrees. Grease doughnut pans. If using a donut pan, plug it in to start heating it.

Stir in toffee pieces and diced pear until thoroughly combined.

2/3 full. Bake at 350 degrees for 12 – 15 minutes or until tops are brown and an inserted toothpick comes out clean. Place the donut pans on cooling rack and let the doughnuts cool in the pans.

If using a Donut Maker

, fill the bottom portion until it is just full. Close the lid and cook for 7 minutes or until the donuts are brown. Remove the doughnuts and allow them to finish cooling on a cooling rack.

Once the doughnuts are cool, sprinkle powdered sugar over them. 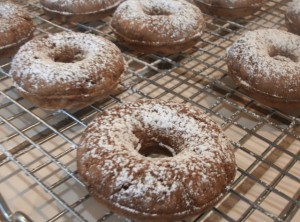 Once again I feel the need to point out that I consider doughnuts a dessert, not a breakfast food. And with very good reason!

While volunteering as a budget counselor, I realized that food is the element of most people’s budgets where they have the greatest control. I set out to develop low-cost recipes from scratch to prove it’s possible to create delicious meals on a limited budget. Eating well while spending less is about more than just creating recipes using inexpensive ingredients; it’s about creatively combining ingredients so you don’t feel deprived and are inspired to stick to your budget.
9 shares