I challenged my daughter and her friend to see how much they could buy with $20.00 at our local thrift store. My daughter is naturally frugal, so I knew she would do well, but I was still surprised with all that she was able to purchase. My daughter came home with 2 pairs of pants, 3 tops, and 2 dresses which came in right under $20.00, but she also found a pair of shoes that met her exact specifications (she had been searching for this style of shoe for over two years), so the final total for everything was a little under $25.00. Her friend found 4 shirts and a skirt for $20.00, but fell in love with a purse at the register and ended up spending a little over $24.00.

In the first picture my daughter is wearing a Maggie London black silk dress that she bought for$6.99. She is also wearing the $4.99 shoes.

Our thrift store has a bargain bin where they sell items that they could not sell in the main store for greatly reduced prices. You can buy clothing there for $1.50 a pound! My daughter found the black pants in there. She found the bolero in the main thrift shop for $2.49. The pink tank and hat were already in her wardrobe (I think she bought the tank at Wet Seal for $5.00, so it cost more than the pants and bolero combined).

She also found the brown pants and the tan top in the bargain bin. When I asked her how much they cost she said, “I don’t know; I will have to go weigh them”. She says the brown pants are the most comfortable pants she has ever worn and is grateful to the person who broke them in for her. She already owned the light blue tank, which she bought at Kohl’s for $5.00, so it cost twice as much as the shirt and pants combined. 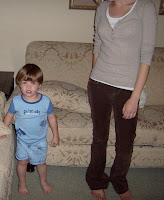 I was taking a picture of Rew and happened to catch part of my daughter in this photo. I included it because I happen to like the brown combo better with her white Banana Republic tank. (I bought the tank on sale for $6.99 last week, because it has a nicely detailed neckline, unfortunately it doesn’t show up in the picture. But I digress, the point is the tank cost more than three times as much as the shirt and pants). We should start looking for tank tops at the thrift store!

The floral top is another bargain bin find. Those pants really must be comfortable because she is still wearing them. Does she looked a little annoyed with the paparazzi to you?

My daughter and her friends like to go ballroom dancing. She bought this $6.99 dress for tango night and is threatening to wear a red rose in her hair. She is once again wearing her $4.99 shoes.
Do you like to shop at thrift stores? Are you wary of buying second hand or like my daughter are you thankful that somebody has already broken in your clothes?
This post has been linked to Super Savings Saturday and 2ndTime Around Tuesday.
2 shares 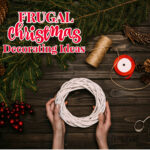 Heart of Christmas: A Christian Alternative to Elf on the Shelf

While volunteering as a budget counselor, I realized that food is the element of most people’s budgets where they have the greatest control. I set out to develop low-cost recipes from scratch to prove it’s possible to create delicious meals on a limited budget. Eating well while spending less is about more than just creating recipes using inexpensive ingredients; it’s about creatively combining ingredients so you don’t feel deprived and are inspired to stick to your budget.
2 shares