This week I have the privilege of sharing gluten-free holiday recipes created by Chef Cat Cora. Today’s recipe is a delicious Gluten-Free Cheddar Apple Crumble. The crunchy crumb topping is made by combining cheddar cheese, pecans, and Pillsbury® Gluten Free refrigerated pie and pastry dough. Cat Cora creates the perfect balance of sweet and savory in this dish. 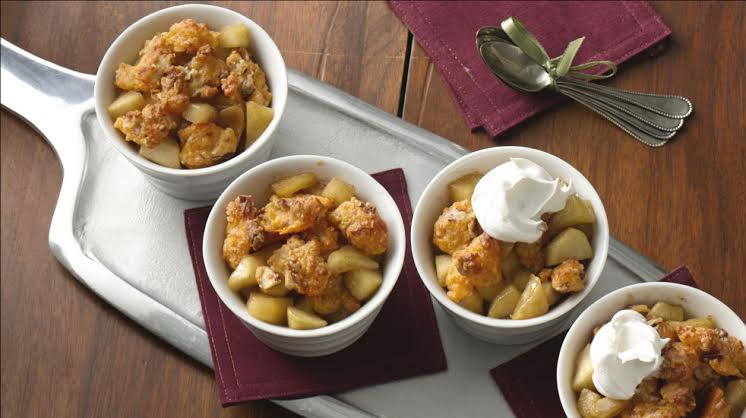 The lightly spiced apples in this dessert are topped with a crunchy, crumb topping full of savory Cheddar cheese.

Cat Cora made television history as the first female Iron Chef on Food Network’s Iron Chef America, and most recently became the first woman to be inducted into the American Academy of Chefs® Culinary Hall of Fame. She is an accomplished author, restaurateur with six dining establishments, avid philanthropist and television host. Cora has authored three successful cookbooks, and one children’s book. She has appeared in a number of hit TV food shows, including Food Network’s Melting Pot; Kitchen Accomplished; NBC’s Celebrity Cooking Showdown; and Bravo’s Around the World in 80 Plates. In 2004, she founded Chefs for Humanity, a non-profit organization dedicated to reducing hunger worldwide by supporting humanitarian relief and promoting nutrition education. Cora grew up in an intimate Greek community in Jackson, MS, where she developed a passion for the culinary arts while watching her family infuse Southern spices with Mediterranean delicacies. She resides in Santa Barbara, CA, with her wife and four sons.

While volunteering as a budget counselor, I realized that food is the element of most people’s budgets where they have the greatest control. I set out to develop low-cost recipes from scratch to prove it’s possible to create delicious meals on a limited budget. Eating well while spending less is about more than just creating recipes using inexpensive ingredients; it’s about creatively combining ingredients so you don’t feel deprived and are inspired to stick to your budget.
133 shares