↑
You are here: Home / Naturally Frugal Living / Birthday Shopping in My Attic and a Non-Consumer Birthday Cake
This post may contain affiliate links. Read our disclosure policy here.
4 shares
For some reason, one of the hardest thing for me to reconcile with our bonus baby is what to do with the toys from the first batch. When children are born a couple years apart toys are naturally passed down, but with a 14 year gap between my second and third child, the toys had already been packed away in the attic for our future grandchildren.

I struggled with whether I should start from scratch and buy Rew all new toys. That seemed unnecessarily expensive, plus the toys in the attic were actually made in America and Europe. Should I bring all the toys down? That seemed like it would be overwhelming, as well as increase the likelihood of spoiling Rew. So I sat down with my older kids and we came up with a plan: Whenever a gift-giving occasion occurred, they would “shop” in the attic for a present for their younger brother. 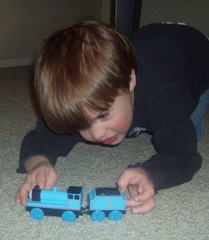 Andrew is quite happy playing with a regifted train he received for his birthday!
Non-Consumer Birthday Cake
I wanted to make an airplane cake for Andrew’s birthday, but wasn’t sure how to go about it. I asked my older kids for ideas and we were leaning towards making the top of the cake look like the deck of an aircraft carrier and putting toy airplanes on top. However, when I took my oldest son “shopping” in the attic, he found an airplane and control tower that went with the Thomas items he had picked out for Rew and suggested I use them to decorate the cake. We washed them off and used them to make this birthday cake: 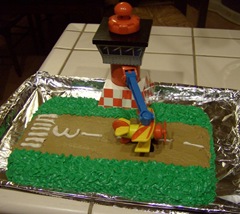 What I like most about this cake, is that everyone was involved in creating it, including my husband who marked the runway for me. Later that evening I told my oldest son, that I didn’t remember buying that plane set for him and he said that I bought it for him at a thrift shop in Virginia. So we reused a reused toy to decorate the cake!

Have you ever regifted or given a used item for a gift? I have to admit that I was a little uncomfortable with the idea at first. However, when I was looking on the web for some items for Rew’s Easter basket, I saw his favorite stuffed animal, which is a hand-me-down from his big sister for sale for $89.00 on amazon.com. Apparently, at some point items stop being old hand-me-downs and start becoming valuable vintage items!

This post is linked to Works For Me Wednesday, because regifting is working for our family. Even more so, since we decided to join The Compact and not buy anything new for a year. 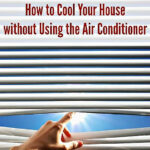 How to Cool Your House without Using the Air Conditioner 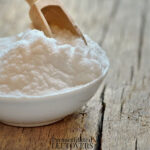 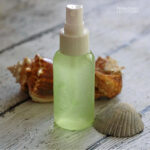 While volunteering as a budget counselor, I realized that food is the element of most people’s budgets where they have the greatest control. I set out to develop low-cost recipes from scratch to prove it’s possible to create delicious meals on a limited budget. Eating well while spending less is about more than just creating recipes using inexpensive ingredients; it’s about creatively combining ingredients so you don’t feel deprived and are inspired to stick to your budget.
4 shares