You don’t have to skip stuffing just because you are gluten-free! Check out these gluten-free stuffing recipes. 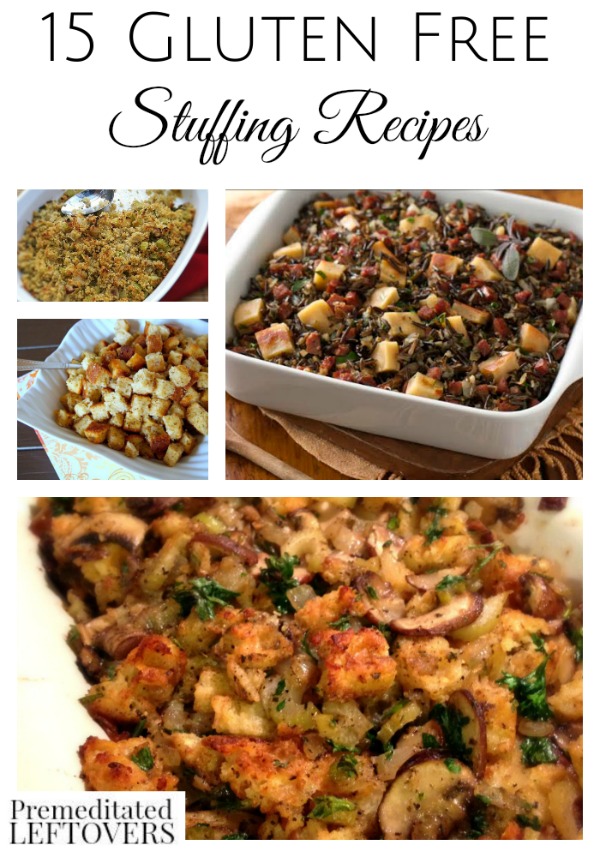 These 15 Gluten-Free Stuffing Recipes will make your Thanksgiving meal just like you remember from childhood. Cornbread, gluten-free bread, quinoa, and rice are the base of these recipes. They are delicious, full of flavor, and mostly super easy to create. There are a few extra steps if you have to make the cornbread from scratch, but it is well worth it to enjoy this classic holiday treat.

I’ve included some great choices that are both sweet and savory. The addition of sausage, chicken, apples, and even some traditional vegetables like celery, carrot, and onion make these gluten-free stuffing recipes amazing choices your entire family will enjoy.

Gluten-Free Sausage Cranberry Stuffing from Real The Kitchen & Beyond

Gluten-Free Traditional Stuffing Recipe from Smile For No Reason

If you prefer a classic Southern cornbread dressing, there are great options in this list that give you the same flavors you grew up with.  For a more traditional stuffing that is often cooked inside the bird, there are yummy options that come from gluten-free bread, homemade gluten-free bread, or other alternative sources.  These gluten-free stuffing recipes are some of our favorite for the holidays!

How to Cook a Turkey in a Slow Cooker

How to Make Turkey Gravy

The Secret to Creamy Mashed Potatoes

While volunteering as a budget counselor, I realized that food is the element of most people’s budgets where they have the greatest control. I set out to develop low-cost recipes from scratch to prove it’s possible to create delicious meals on a limited budget. Eating well while spending less is about more than just creating recipes using inexpensive ingredients; it’s about creatively combining ingredients so you don’t feel deprived and are inspired to stick to your budget.
542 shares